Brexit and Its VAT and Customs Consequence

Source: Andersen Tax LLC in the U.S., a member firm of Andersen Global: Brexit and Its VAT and Customs Consequence (Effective: June, 2017)
http://Andersen.com//publications/newsletter/Q1-2017/brexit-and-its-vat-and-customs-consequences

On June 23, 2016, a majority of the United Kingdom (UK) decided that their country should leave the European Union (EU), known as Brexit.

Both sides now look forward to possibly lengthy treaty negotiations before they can put their legal and economic relations on a new basis. Due to this impending exit, it is advisable for businesses to keep an eye on the development of the tax and legal issues and to make appropriate preparations.

British Prime Minister Theresa May outlined in her speech on January 17, 2017 a 12-point plan on what relationship Britain will seek to have with the EU once it leaves the Union. It is expected that in March 2017, the British government will formalize its request for exit to the European Commission. After that date, the negotiations regarding the new nature of the relations between the EU and UK will begin. Until that date, no legal changes will have taken place and general conditions remain unchanged.

On February 6, 2017 the Centre of European Reform estimated that Brexit would cost the UK approximately EUR 60 billion. Along with the cost itself, Brexit also affects all enterprises having their legal seat or a branch in an EU country, provided that they have some kind of business relations with UK. Further, it also affects enterprises having their legal seat outside the EU (for example, in the U.S.) that have special trade relations with the EU and sell goods or purchase goods from the UK. For this reason, it is essential for these enterprises to start considering the likely changes in the near-term, particularly because it is likely there will be serious implications in connection with VAT and customs duties with respect to the trading of goods and services with the UK. Changes will be required with regard to the processes (for example, amendment of supply chains), IT (in particular tax codes), price structuring and invoicing (including the price and the invoice text).

The EU single market and its fundamental freedoms

One of the cornerstones of the EU is free access to the single market. This means a common economic area that guarantees all EU citizens four basic freedoms:

A country can only have free access to the single market if all four above-named basic freedoms can be guaranteed. The UK has decided that it no longer wants to guarantee the free movement of persons, i.e. unrestricted access of EU citizens to the British labour market. Therefore, the UK will no longer be able to participate in the single market.

It can be assumed that the UK VAT system will remain in force after Brexit given that it represents a share of around 20% of the entire fiscal revenue. However, when interpreting the corresponding regulations, the British authorities and courts would no longer be bound by European law and to the decisions by the EU Court of Justice. This calls into question how the VAT system is imposed in the UK after Brexit.

From a customs standpoint, European customs legislation is a central part of EU law and makes it possible to achieve the fundamental freedom of the free movement of goods.  Since 1994, the customs legislation in the EU member states was no longer based on national and local provisions, but instead on the Union Customs Code. The basis for this is the EU Customs Union, which forbids the levying of customs duties and charges in connection with the trade in goods between member states, and which also introduced a uniform customs tariff in relations with third countries.

After Brexit, the UK will have the status of a third country. The UK would then be entitled to give itself its own national customs regulations, and to levy customs duties as it sees fit. Likewise, the EU will no doubt also levy customs duties on the import of British goods.

As a result, the shipment of goods from the EU to the UK must be declared as an export rather than intra-Community supply. Until Brexit, the corresponding regulations of an EU member state must consequently be complied with, in particular the burden of proof in the case of a supply that is exempt from tax. Once Brexit occurs however, it will no longer be necessary to make Intrastat declarations and recapitulative statements when shipping goods to UK.

When goods are purchased from the UK to the EU, these transactions will no longer be an intra-Community acquisition, but an import into the EU, with possible import VAT as well as customs duties levied. Until the UK and EU negotiate new trade and customs agreements, companies must deal with these uncertainties created by this post-Brexit reality. 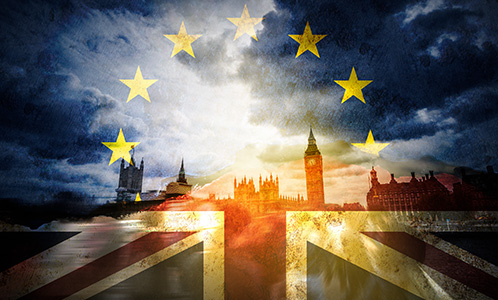